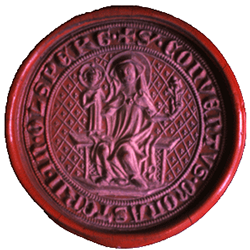 In the 13th and 14th century the nuns of Olsberg established a good reputation. They accomplished extraordinary work in benefit of the local farmers while living and acting strictly according to the Cistercian rules. Even the nobility benefited from the diligence and the lifestyle of the nuns. Thus, the nunnery gained more and more properties from bequests and donations. By the end of the 14th century, the main acquisitions were completed, comprising a considerable area fields and vineyards in the canton of Basle-County, Alsace and the area of the South Baden. The nunnery also owned several buildings in the towns of Rheinfelden and Basle.

The first crises started with a disastrous fire in 1427.  Within a short period of time the church was repaired but the reconstruction of the nunnery proceeded slowly. The morale of the nuns reached rock bottom. All the efforts and admonitions of the abbot and the bishop were unsuccessful. Finally, the leadership was handed over to an abbot with six monks, but they failed did not succeed either. Finally, based on insistence of the pope, the leadership was assigned to an abbess again, but this still did not improve the situation.  More and more daughters of aristocrats joined the nunnery, not because of their religious beliefs but rather due to a destructive family policy which attempted to regulate the number of women within the family because of monetary reasons. The consequent forced enrollments in the nunnery did not help to solve the already existing internal problems. In addition, the nunnery was attacked and plundered during the peasant’s revolt in 1525. As a result the abbess tried to get rid of the many of bigger part of the possessions, but the Austrian government prevented this. With the beginning of the reformation, most of the nuns left the nunnery. In the following 23 years, the administration was taken care of by a steward of the “father” abbey.

In Katharina von Hersberg, an abbess was found who was willing to renovate the inner and outer parts of the nunnery. But her preference for a well-tended kitchen and her generous hospitality to selected guests meant that renovation was not her first priority. Her successor was an industrious woman from the Tirol. Within a short period of time, she renovated the nunnery. In 1632, however, her efforts met a body blow. During the Thirty Years’ War, the nunnery was robbed and destroyed twice by Swedish troops. The nuns had to flee and lived for three years in an exile in Wettingen and afterwards in Mümliswil.

It was Bernarda von Freiburg who ordered the removal of the ridge turret and the rear part of the nave to build the spire and the stone gallery there. For financial reasons, the rebuilding of the church could not be completed, and the splendid renovations could not hide the fact that the nunnery approached a crisis. The political position of the nunnery threatened its continuation. The “Violenbach” beneath the nunnery had formed the border between Austria and the Old Swiss Confederacy for a long time. The secular control of nunnery was in the hands of the Austrian government, while the ecclesiastical surveillance was disputed. Both, the abbot of the French abbey of Lucelle and the abbotts of “Salem” and “Trennbach”, claimed this position. The economic centre was in the Old Swiss Confederacy. All these internal conflicts led to the dissolution of the nunnery. The emperor then converted the former nunnery to a “Damenstift” in 1790. This was an institution in whcih only the abbesses were obliged to take vows.

The collapse of the Old Swiss Confederacy spelled the definitive end of the nunnery. In 1802, it was secularized, the nuns retired and its possessions pronounced public property.

In 1786, the abbey had become the parish church of Olsberg. (Previously it was part of the church congregation of Augst). After the first Vatican Council, however, the parish of Olsberg was one of the first who turned away from the Roman Catholic Church. The church treasure is nowadays in the possession of the Christian Catholic Church of Switzerland and nowadays the abbey can be used by all three national churches.

By 1807, the former nunnery had become a “Töchterinstitut” for daughters of aristocrats. With time, this institution became one of the first training schools for female teachers within the canton. In 1835, the cantonal parliament requested that all students have to be accepted with no regard to their origin. The administration in charge at that point of time, however, was not able to fulfill these conditions for financial monetary reasons and therefore closed the school. Josephine Stadlin attempted to revive the project but she failed after a couple of years.

The “Pestalozzistiftung der Deutschen Schweiz“, founded by Heinrich Zschokke in 1846, gave a home in Olsberg to neglected children and orphans. They were taught in the former rooms of the nunnery, but in two separate groups – according to their confessions. For financial restrictions, bad harvests for a couple of years and internal problems, the founders were urged to hand the private institution over, and in 1860, the canton of Aargau took over the institution.

Until 1975, only boys were housed there. Then, with education changes, it became co-educational and nowadays 24 girls and boys, with normal skills are given individually tailored care, education and training. The “Stift Olsberg” remains a special school and a boarding home with an educational model which is close to a family. The children are guided and encourage in three living and school groups. Since 1999, the farm is leased out and is no longer affiliated to the school.

In 1999 the conversion to biological management took place, while privatization with lease of agriculture took place.

The last structural measures - in addition to the ongoing maintenance work - were carried out in 2008 by the utilization of the upper barn.

On 1 August 2017 the change from a public to a private carrier takes place. The «Stift Olsberg» changes from the canton Aargau to the private foundation of the «Kinderheim Brugg».

Tabular chronicle of the monastic history

First site on Kleinroth near

the monastery of St. Urban.

«Hortus Dei» is the oldest

community by the church.

Construction of church and

estate by purchase and

cover the area west of

now in the cantons of both

Countryside, in Alsace and

in the area of south Baden.

of the nunnery was slow

nunnery was put in the

hands of an abbot with six

monks. They failed to

pope an abbess was again

entrusted with the manage-

ment of the nunnery.

nunnery’s land in the rural

part of Basel, but the

During the period of the

the nunnery, which was

abbess of the Tyrol,

reformed the nunnery both

internally and externally. It

during the siege of

first to Wettingen and then

and restoration of the

church in Baroque style, and

added a floor to the nunnery

and other rooms in the east

wing. Noteworthy is the

ved Tree sample with the

coat of arms of the grand-

parents of the abbess.)

saint of the Catacombs of

Rome) were brought to

second patron of the

activity. Demolition of the

roof knight and the

posterior part of the nave.

Construction of the pulpit, a

new stone gallery and a

of the West Wing.

tion activity. The result is

the southern garden with a

modifications in the church:

at the altar. Replacement of

two side altars au the years

construction of the altar of

Salem despite protests of

the parish church of

belonged to the parish of

into a secular, aristocratic

property of the Canton

and forces the retirement of

and rectory, along with other

assets. Lease of the nunnery

mill to farmers from Olsberg.

foundation by the Canton of

of the State Pestalozzi

of the cloister and part of

the east wing of the chapter

house because of the

demolition of the bakery

mill in connection with the

laying of the thoroughfare

Church. The windows in the

south and west facades are

church. Infusion of a cement

floor on the broken brick

medieval tower with the old

staircase in the main

building. Construction of a

new tower with a new

dings and land, with the

exception of the rectory.

because of the danger of

Change from the collective

dormitories to a group home

and support of children.

Only male children and

of the renovation. First

admission of girls and boys

from the canton Aargau to

the private foundation of the